What is time? What is change? The Ontology of Dynamical Systems 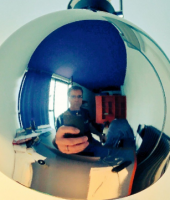 Talk by Johannes Jaeger (CRI / Complexity Science Hub Vienna) within the framework of the lecture series "Sciences in Context", organized by CRI and Paris IAS

Sciences in Context is a new public lecture series, which aims to bring concepts and perspectives from the frontiers of the humanities to the CRI community.

Each lecture will take place on the last Tuesday of the month, featuring fellows from CRI and from the Institut d'Études Avancées (IEA) de Paris.

Lecture topics will be discussed in an open session of the Practical Philosophy Club on the Friday before each lecture, to facilitate an active and participatory discourse with the invited speaker.

Ever since Zeno's paradox of the arrow, the nature of time and change has been a deep, puzzling mystery. How can Zeno's arrow move at any one instant? How can it traverse an infinity of instants before hitting its target? The idea of instantaneous velocities, introduced by Leibniz and Newton, seem to have solved Zeno's problem. However, major questions about the nature of time remain, and we are still struggling to find a rigorous and general definition of the concept of change. I will use the mathematical tools of dynamical and general systems theory (presented in an accessible and non-technical way) to introduce a general notion of change (or flow). It implies that any coherent concept of change must be extended in time. It must have a duration. In mathematical terms, change requires some sort of mapping or morphism forward over an interval of time. I will discuss how a time-extended concept of change leads to the sort of consistent causal dynamics we observe in the world. Change as a time-extended mapping with duration suggests the radical notion that instantaneous moments, or instants, do not exist. The abstract idea of instants is convenient for solving many practical and mathematical problems. However, it does not represent the true time-extended nature of the ever-flowing present moment.

Johannes Jaeger was educated in Switzerland, New York, and Cambridge. He is the former head of an interdisciplinary research laboratory at the Centre for Genomic Regulation (CRG) in Barcelona (from 2008 - 2015). In 2014/15, he was a fellow at the Institute for Advanced Study in Berlin. He was the director of the Konrad Lorenz Institute for Evolution and Cognition Research (KLI) in Klosterneuburg near Vienna from 2015 to 2017, and a visiting scientist at the Center for Systems Biology Dresden in 2017/18. He has a gues professorship at the University of Vienna, is associated with the Complexity Science Hub (CSH) Vienna, and is currently a fellow at CRI.