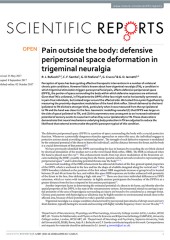 Perception of space has been guiding effective therapeutic interventions in a number of unilateral chronic pain conditions. However little is known about how trigeminal neuralgia (TN), a condition in which trigeminal stimulation triggers paroxysmal facial pain, affects defensive peripersonal space (DPPS), the portion of space surrounding the body within which defensive responses are enhanced. Given that TN is unilateral, in TN patients the DPPS of the face might not be horizontally symmetric as in pain-free individuals, but instead larger around the affected side. We tested this a priori hypothesis by measuring the proximity-dependent modulation of the hand-blink reflex. Stimuli delivered to the hand ipsilateral to TN elicited a stronger blink, particularly when it was measured from the eye ipsilateral to TN and the hand was closer to the face. Geometric modelling revealed (1) that DPPS was larger on the side of space ipsilateral to TN, and (2) this asymmetry was consequent to an increased estimated potential of sensory events to cause harm when they occur ipsilaterally to TN. These observations demonstrate that neural mechanisms underlying body protection in TN are adjusted to reduce the likelihood that external events evoke the painful paroxysm typical of this condition.