Climate Econometrics: Can the Panel Approach Account for Long‐Run Adaptation? 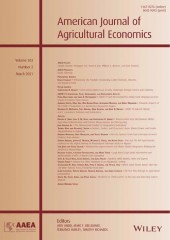 The panel approach with fixed effects and nonlinear weather effects has become a popular method to uncover weather impacts on economic outcomes, but its ability to capture long‐run climatic adaptation remains unclear. Building upon a framework proposed by McIntosh and Schlenker (2006), this paper identifies empirical conditions under which the nonlinear panel approach can approximate a long‐run response to climate. When these conditions fail, the obtained relationship may still be interpretable as a weighted average of underlying short‐run and long‐run responses. We use this decomposition to revisit recently published climate impact estimates. For spatially large panels, the estimated temperature–outcome relationship mostly reflects the long‐run climatic response; this is not so for precipitation. We find some evidence of long‐run climatic adaptation for crop yield outcomes in the United States and France.