Accueil / Résidents / A question of honour: how the 19th century can teach us to civilise today’s international conflicts 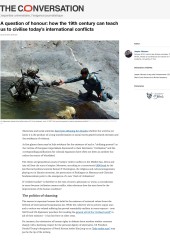