Challenges of Art and Artifice: Hearing Bach’s Art of Fugue 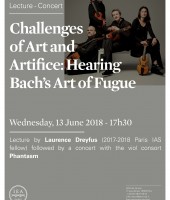 The title of J.S.Bach’s late work Kunst der Fuge seems to assert the composer’s intention to highlight the ‘art’ over the ‘artifice’ in his ambitious collection of fugues on a single theme which draw on a long historical tradition of elaborate counterpoint. In this presentation - accompanied by live musical examples played by the viol consort Phantasm – Laurence Dreyfus will shed light on the kinds of challenges Bach set for himself in various kinds of pieces he called ‘Contrapunctus’ and how the aural grasp of contrasting forms counterpoint enhances a listener’s appreciation of this monumental work. The presentation will also treat a current scholarly controversy on the status of Bach’s final fugue in which the composer boldly embedded a reference to his own name in a piece he mysteriously left unfinished at his death.

Phantasm, an award-winning consort of viols, was founded in 1994 by Laurence Dreyfus and has become recognised as the most exciting viol consort active on the world scene today, with the intensity and technical perfection of its interpretation setting new standards internationally in the realm of consort music.

The ensemble catapulted into international prominence when its debut CD of works by Henry Purcell won a Gramophone Award for the Best Baroque Instrumental Recording of 1997. Since then, the consort has travelled the world over, performing in festivals and on concert series in cities such as London, Prague, Tokyo, Istanbul, Helsinki, New York, and Washington DC. Recent engagements have included the Trigonale Festival (Austria), Heinrich Schütz Festival in Dresden, Musikfestspielen Sanssouci Potsdam, the Lufthansa Early Music Festival in London, the Misteria Paschalia Festival in Cracow, the Stockholm Early Music Festival, Brussels’ Palais des Beaux Arts and Ghent’s De Bijloke hall along with a concert tour of New Zealand – appearances routinely described by critics as ‘the real highlight of the festival’ by ‘the best viol consort in the world’.

Phantasm’s repertoire lays emphasis on the English music of the Renaissance and the Baroque – by composers as Purcell, Byrd, Gibbons, Dowland, Locke and Lawers – though French and Italian music also appears on Phantasm’s programmes as well as do J.S. Bach’s Art of Fugue and Mozart’s arrangements of Bach fugues from the Well-Tempered Clavier.

Phantasm’s 20 recordings have won consistent praise from the critics and the general public. Their CD of Orlando Gibbons (2004) won the Gramophone Award for Early Music and was a Finalist for Gramophone Recording of the Year. Their recording of Lawes‘s Royal Consort not only became the CD of the week in various broadcast stations all over Europe and in the US, but also ranked high on the UK specialist Classical Charts for several months before winning the 2016 Chamber Music Prize from Limelight Magazine (Australia). Their recording of John Dowland’s Lachrimae not only won the 2017 Gramophone Award for Early Music but was also crowned with the prestigious 2017 Diapason d’or de l’année.

From 2005 until 2015, Phantasm was based at the University of Oxford and Magdalen College as their Consort-in-Residence. Since then, Phantasm has made a new home in Berlin, where its member from the UK, Finland, and Germany assemble to rehearse and record new repertoire.