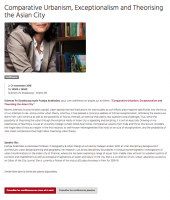 Recent attempts to provincialise a global urban agenda has had implications for area studies as such efforts place regional specificities into the focus of our attempts to de- and re-center urban theory. And thus, it has sparked a conscious address of African exceptionalism, rethinking the lessons we learnt from Latin America as well as the possibility of ‘Asia as method’, an exercise that opens new questions and challenges. Thus, while the possibility of theorising the urban through the empirical reality of Asian city is appealing and tempting, it is not an easy task. Drawing on my experiences of teaching a course at University College London titled Asian Cities: Comparative Lessons from India and China, this lecture considers the fragile idea of Asia as a region in the first instance, its well-known heterogeneities that insist on an aura of exceptionalism, and the probability of inter-Asian comparisons that might allow Asianising urban theory.