Crafting and Re-Crafting a Thirteenth-Century Motet 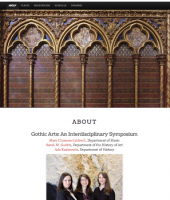 In a passage from Thomas Aquinas’s treatise on good governance, a text written for the Cypriot king around 1267, the angelic doctor wrote: “Art is the imitation of nature. Works of art are successful to the extent that they achieve a likeness of nature.” This passage would seem to be the perfect explanation for the exceptionally life-like Adam sculpted for the south transept at the Parisian Notre-Dame, completed a handful of years earlier and possibly seen by Thomas before he left Paris for his Italian sojourn. However, by “ars” Aquinas meant not our “fine arts,” but technique and, even more broadly, human endeavor. The passage comes not from a discussion of the visual arts, but from a justification of benign kingship as opposed to democracy—the former being more akin to nature.
This interdisciplinary conference, Gothic Arts, celebrates the polyvalent definition of ars in the long thirteenth-century of the medieval francophone world. The conference proposes to closely examine Gothic Arts as Gothic techniques, not only in terms of the praxis of how things were done, but also as a means of doing something tangible in the world. Situated in the various cultural milieux of the thirteenth century, the conference explores modes and concepts of techne and creation within and across diverse fields. With an eye toward both implicit and explicit interdisciplinary links, we will explore the realms of practice—including but not limited to the clerical, scholastic, musical, medical, artistic, legal, architectural, administrative, literary and so on.
Panels will examine the various arts—cultural products of thirteenth-century France—from a profoundly interdisciplinary perspective, including the conceptual, visual, material, legal, sonic, and literary.