Accueil / Evénements / The Kardakon Kome in Lycia: Status, Foundation and the Evolution of a Military Settlement

The Kardakon Kome in Lycia: Status, Foundation and the Evolution of a Military Settlement 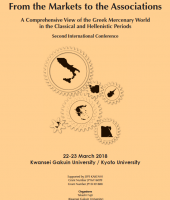 Our first conference in 2016 focused on associations, that is the relationships between the public and private spheres of mercenary within the Mediterranean states such as Carthage, Rome, the Greek poleis (oligopolistic/ monopolistic), Egypt, Achaemenid Persia and, finally, Hellenistic states such as the Kingdom of Pontus. In this second conference, held at Kyoto University, our interest will shift towards the markets: political and economic conditions for the existence of mercenaries.
We will again cover a chronologically and geographically wide range, that is, Aetolia, Egypt, and Hellenistic states including cities, federal states, and kingdoms.
This conference will enhance the global vision, both in its geographical and the chronological framework, sketched on the answers to the key questions formulated in the previous conference: how mercenaries and professional recruiting markets worked and what economic prospects they had when they agreed to be part of, or even direct, a military force recruited by a foreigner. Thus, the ultimate goal of this encounter is to analyse the main aspects that defined the mercenary system as a market of recruitment and its evolution from the birth of mercenary to the Hellenistic period, over the different Mediterranean powers in the ancient world.