Accueil / Evénements / The Misadventures of the "Problem" in "Philosophy" 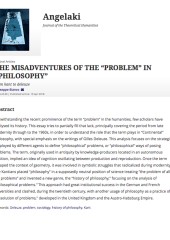