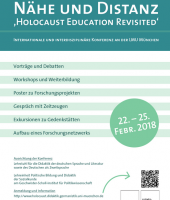 We run an online study where participants read a text with either a morally positive and a morally negative protagonist. After the participants read one version of the text, they rated the aesthetic and moral value of the text and answered several empathy/sympathy related questions. The results showed that the moral nature of the protagonist affected the ratings of the readers on, empathy, aesthetic evaluation, suspense and transportation.
We believe that our study can be an important contribution to the discussion on Holocaust Education because it is based on contemporary readers. As our subjects were Germans it is interesting to observe the impact of their Holocaust education in their reception of a literary text including a nazi. From the methodological point of view we think that, especially for a highly sensitive topic as Holocaust Education, it is important to integrate theoretical claims on memory, didactics, reception, medialization of Holocaust with empirical findings on the reception of cultural objects such as books, films, museums etc.