Accueil / Publications / A good, a bad, and an evil character : Who renders a novel most enjoyable ?

A good, a bad, and an evil character : Who renders a novel most enjoyable ? 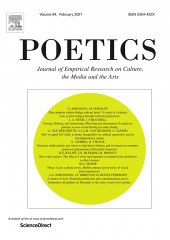 Massimo Salgaro,Valentin Wagner, Winfried Menninghaus, " A good, a bad, and an evil character : Who renders a novel most enjoyable ?" in Poetics, [online] April 2021.

The choice, or invention, of protagonists is an important part of the poetics and aesthetics of narratives and dramas. Aristotle stipulated that, for the purposes of engaging the readers or onlookers, protagonists should neither be excessively good nor excessively bad, leaving room for much variation in the middle-ground (Aristotle, 1961). A theoretical model of the enjoyment of negative emotions in art reception (Menninghaus et al., 2017) supports the conclusion that aesthetically preferred choices of characters may not be equally distributed between the poles of saints and villains, but show a bias towards the latter. We experimentally tested this assumption by presenting an identical excerpt from a novel by José Saramago to participants, while exclusively inserting a few words of background information which cast the protagonist's distant past either in a morally good, bad, or evil light. Compared to the good character version, the bad character version indeed had an enhancing effect on scales for “suspenseful,” “captivating,” and “entertaining,” and no adverse effect on any of the seven other aesthetically evaluative dimensions. Fully supporting Aristotle's thumb rule, none of these enhancing effects of character Badness on aesthetic perception/evaluation compared to the good character condition extended to the evil character version. Moreover, moral evilness of the protagonist had an adverse effect on sympathy, though not on empathy. In contrast, the good and the bad character versions were rated equally not only on empathy, but also on sympathy scales.