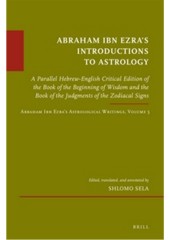 The present volume offers a critical edition of the Hebrew texts, accompanied by English translation and commentary of Reshit Ḥokhmah (Beginning of Wisdom) and Mishpeṭei ha-Mazzalot (Judgments of the Zodiacal Signs) by Abraham Ibn Ezra (ca. 1089–ca. 1161). The first, the summa and by far the longest of his astrological works, the target of the most cross-references from the rest of that corpus and the most influential, enjoyed the widest circulation among Jews in the Middle Ages and after. The second, by contrast, is the most obscure. It is never referred to elsewhere by its author and is the only work for which Ibn Ezra’s authorship must be substantiated. Reshit Ḥokhmah and Mishpeṭei ha-Mazzalot were written in order to explain concepts common to the various branches of astrology that Ibn Ezra addressed elsewhere and to elucidate the worldview that underlies astrology. These two treatises are the richest and most varied with regard to the astrological information they present. Reshit Ḥokhmah and Mishpeṭei ha-Mazzalot also exemplify the close collaboration between astronomy and astrology in medieval science and are the two components of Ibn Ezra’s astrological corpus with the most extensive, comprehensive, and significant astronomical content.