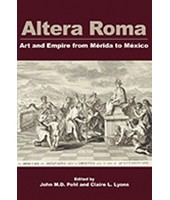 Altera Roma explores the confrontation of two cultures—European and Amerindian—and two empires—Spanish and Aztec. In an age of exploration and conquest, Spanish soldiers, missionaries, and merchants brought an array of cultural preconceptions. Their encounter with Aztec civilization coincided with Europe’s rediscovery of classical antiquity, and Tenochtitlán came to be regarded a “second Rome,” altera Roma. Iberia’s past as the Roman province of Hispania served to both guide and critique the Spanish overseas mission. The dialogue that emerged between the Old World and the New World shaped a dual heritage into the unique culture of Nueva España. In this volume, 10 eminent historians and archaeologists examine the analogies between empires widely separated in time and place, and consider how monumental art and architecture created “theater states,” a strategy that links ancient Rome, Hapsburg Spain, preconquest Mexico, and other imperial regimes.