Accueil / Publications / Atlantic Cultures and the Age of Revolution

Atlantic Cultures and the Age of Revolution 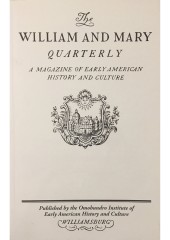 Cultural history has become a favored method for studying the revolutions of the late eighteenth and early nineteenth centuries, but its application to the wider age of revolution remains spotty. It has been notably absent from contextual histories of the period, those that—in the tradition of R. R. Palmer—compare rather than connect the era’s revolutions. This methodological gap, which isolates the American Revolution from its contexts, risks distorting the revolution’s interpretation and meaning. A contextual cultural history of the revolutionary era is nonetheless imaginable; this article traces its methodological contours. Cultural practices that were widely shared around the prerevolutionary Atlantic world provided a shared matrix for patriot politics. Work by theorists of culture-as-practice suggests that these cultures would have persisted intact into the revolutionary period and shaped politics in similar ways across the revolutionary Atlantic. A pair of case studies, focused on letter-writing practices and patriot politics in 1770s North America and 1790s Saint Domingue, illustrate how this approach makes it possible to reread individual revolutionary episodes and figures while bringing together disparate revolutionary movements within a shared Atlantic frame.