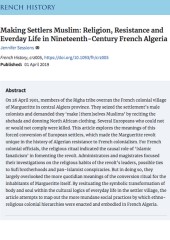 On 26 April 1901, members of the Righa tribe overran the French colonial village of Margueritte in central Algiers province. They seized the settlement’s male colonists and demanded they ‘make [them]selves Muslims’ by reciting the shehada and donning North African clothing. Several Europeans who could not or would not comply were killed. This article explores the meanings of this forced conversion of European settlers, which made the Margueritte revolt unique in the history of Algerian resistance to French colonialism. For French colonial officials, the religious ritual indicated the causal role of ‘Islamic fanaticism’ in fomenting the revolt. Administrators and magistrates focused their investigations on the religious habits of the revolt’s leaders, possible ties to Sufi brotherhoods and pan-Islamist conspiracies. But in doing so, they largely overlooked the more quotidian meanings of the conversion ritual for the inhabitants of Margueritte itself. By resituating the symbolic transformation of body and soul within the cultural logics of everyday life in the settler village, the article attempts to map out the more mundane social practices by which ethno-religious colonial hierarchies were enacted and embodied in French Algeria.