Accueil / Publications / Modern Things on Trial: Islam's Global and Material Reformation in the Age of Rida, 1865-1935

Modern Things on Trial: Islam's Global and Material Reformation in the Age of Rida, 1865-1935 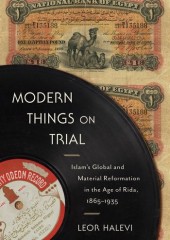 In cities awakening to global exchange under European imperial rule, Muslims encountered all sorts of strange and wonderful new things—synthetic toothbrushes, toilet paper, telegraphs, railways, gramophones, brimmed hats, tailored pants, and lottery tickets. The passage of these goods across cultural frontiers spurred passionate debates. Realizing that these goods were changing religious practices and values, proponents and critics wondered what to outlaw and what to permit.

In this book, Leor Halevi tells the story of the Islamic trials of technological and commercial innovations of the late nineteenth and early twentieth centuries. He focuses on the communications of an entrepreneurial Syrian interpreter of the shariʿa named Rashid Rida, who became a renowned reformer by responding to the demand for authoritative and authentic religious advice. Upon migrating to Egypt, Rida founded an Islamic magazine, The Lighthouse, which cultivated an educated, prosperous readership within and beyond the British Empire. To an audience eager to know if their scriptures sanctioned particular interactions with particular objects, he preached the message that by rediscovering Islam’s foundational spirit, the global community of Muslims would thrive and realize modernity’s religious and secular promises.

Through analysis of Rida’s international correspondence, Halevi argues that religious entanglements with new commodities and technologies were the driving forces behind local and global projects to reform the Islamic legal tradition. Shedding light on culture, commerce, and consumption in Cairo and other colonial cities, Modern Things on Trial is a groundbreaking account of Islam’s material transformation in a globalizing era.