Accueil / Publications / Practice, Judgment, and the Challenge of Moral and Political Disagreement: A Pragmatist Account

Practice, Judgment, and the Challenge of Moral and Political Disagreement: A Pragmatist Account 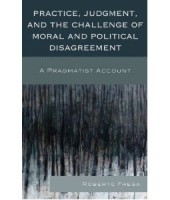 Practice, Judgment, and the Challenge of Moral and Political Disagreement: A Pragmatist Account offers an account of moral and political disagreement, explaining its nature and showing how we should deal with it. In so doing it strikes a middle path between troublesome dualisms such as those of realism and relativism, rationality and imagination, power and justification. To do so, the book draws on the resources of the pragmatist tradition, claiming that this tradition offers solutions that have for the most part been neglected by the contemporary debate. To prove this claim, the book provides a large account of debates within this tradition and engages its best solutions with contemporary philosophical theories such as perfectionism, critical theory, moral realism, and liberalism. The question of the nature of disagreement is both addressed at the general theoretical level and more specifically with reference to moral and political forms of disagreement. At the more general level, the book proposes a theory of practical rationality based upon the notion of rationality as inquiry. At the second, more specific, level, it aims to show that this conception can solve timely problems that relates to the nature of moral and political reasoning.