The Earth’s Sorrow: A History of Buffalo Bill Cody 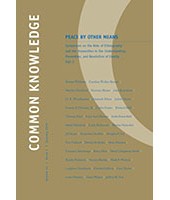 The Museum of Mankind
Spectacle is the origin of the world. Tragedy stands before us, motionless and strangely anachronistic. And so, in Chicago, at the Universal Exposition of 1893 commemorating the four hundredth anniversary of Columbus’s voyage, a display of relics on a stall in the central aisle included the desiccated corpse of a newborn Indian baby. There were 21 million visitors. They promenaded on the wooden balconies of the Idaho Building, admired the miracles of technology, such as the gigantic chocolate Venus de Milo at the entrance to the agricultural pavilion, and then they bought paper cones of sausages selling for ten cents apiece. Huge numbers of buildings had been erected, and the place resembled a gimcrack St. Petersburg, with its arches, its obelisks, its plaster architecture borrowed from every age and every land. The black-and-white photographs we have convey the illusion of an extraordinary city, with palaces ringed around by statues and fountains, and ornamental pools down to which stone steps slowly descend. And yet it’s all fake.

But the highlight of the Universal Exposition, its apotheosis, the feature that was to attract the greatest number of spectators, was the Wild West Show. Everyone wanted to see it. And Charles Bristol—the proprietor of the stall with the Indian relics and the exhibit of the baby’s corpse—also wanted to drop everything and go! But he knew the show, because right at the start of his career, he had been the manager and wardrobe master for the Wild West Show. But it wasn’t the same any more, and was now a colossal enterprise. There were two performances a day, and eighteen thousand seats. Horses galloped past a backdrop of gigantic painted canvases. It wasn’t the loose string of rodeos and sharpshooters that he had known, but a veritable enactment of History. So while the Universal Exposition was celebrating the industrial revolution, Buffalo Bill was glorifying conquest.

Later on, much later on, Charles Bristol had worked for the Kickapoo Indian Medicine Company, which employed nearly eight hundred Indians and around fifty whites to sell its stuff. Its flagship medicine was Sagwa, a mixture of herbs and alcohol for the treatment of rheumatism and dyspepsia. And it would appear that cowboys suffered particularly from wind and borborygmic dyspepsia, because right across the country people were in search of a remedy. Eventually, Charles Bristol abandoned the sale of medicines and embarked on a series of long tours with his collection of objets d’art. Two Winnebago Indians who were part of the Medicine Company had decided to follow him. The museum toured in the Midwest, and the little sketches it staged, where the Indians performed dances to illustrate the specific function of each object, were both entertaining and educational.

Toward the end of 1890, barely three years before the Universal Exposition, Charles Bristol had joined forces with a bum by the name of Riley Miller. Once Bristol chummed up with Riley, the story becomes hard to credit. Previously, according to him, Bristol had accumulated his treasures thanks to his Indian friendships—a succession of little gifts. But Riley Miller was a murderer and a thief. He would scalp and strip dead Indians: he murdered them and then took their moccasins, their weapons, their shirts, their hair—everything. Men, women, or children. A part of the relics displayed by Bristol at the Chicago Fair came from these activities. Later on, the history museum in Nebraska bought Charles Bristol’s collection; and today, somewhere in the museum’s reserve, you might well come across the desiccated body of the Indian baby from the Exposition. What this tells us is that show business and the human sciences had their origins in the same displays, with curiosities lifted from the dead. Which means that today, on museum shelves throughout the world, what you find is nothing but trophies and plunder. And all the Negro, Indian, or Asian objects that we admire were stolen off corpses.