The flexibility of early memories: Limited re-evaluation of action steps in 2-year-old infants 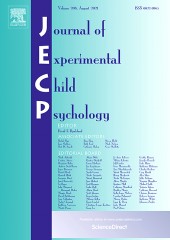 This study investigated the flexibility of 2-year-old infants’ retrieval and reenactment processes. In a delayed imitation paradigm, children were exposed to a constraint change (implemented by the distance of a target object) affecting the relevance of using a tool to obtain a goal (reach the object). In Experiment 1, during demonstration in the first session the tool was either relevant or irrelevant for reaching the goal, and 1 week later it either lost or gained its relevance, respectively. We found that when the tool became unnecessary (relevant to irrelevant change), children used it somewhat less than before and used it less compared with when the tool’s relevance remained the same (relevant to relevant, no change). When the tool became necessary after a constraint change (irrelevant to relevant change), children used the tool more than before, but not as much as in the Relevant–Relevant control condition. In Experiment 2, the timing of the constraint change (immediate or delayed) was varied in a modified version of the Irrelevant–Relevant condition, where practice before the constraint change was omitted. Children were not significantly more flexible in the immediate condition than in the delayed condition, and comparisons with Experiment 1 showed that performance did not change if we omitted the practice before the change. These results indicate that although 2-year-olds show considerable mnemonic performance, they face difficulties in adapting to constraint changes. We propose that this inflexibility may stem from infants’ inability to revise their evaluations formed in previous events due to their immature episodic memory capacities.