Accueil / Publications / The Return of the Native. Can Liberalism Safeguard Us Against Nativism?

The Return of the Native. Can Liberalism Safeguard Us Against Nativism? 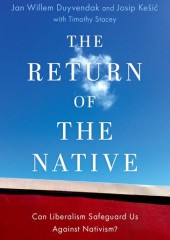 Jan Willem Duyvendak and Josip Kesic with Timothy Stacey, The Return of the Native. Can Liberalism Safeguard Us Against Nativism?, Oxford: Oxford University Press, 2022, 232 p.

An in-depth analysis that demonstrates how and why there has been a resurgence of nativist logic.
It was once thought that liberalism and globalization would consign nativist logics to the fringes of societies and eventually to history. But if it ever left, nativism has well and truly returned, spreading across nations, across the political spectrum, and from the fringes back into the mainstream. In The Return of the Native, Jan Willem Duyvendak, Josip Kesic, and Timothy Stacey explore how nativist logics have infiltrated liberal settings and discourses, primarily in the Netherlands as well as other countries with strong liberal traditions like the US and France. They deconstruct and explain the underlying logic of nativist narratives and show how these narratives are emerging in the discourses of secularism (a religious nativism that problematizes Islam and Muslims), racism (a racial nativism that problematizes black anti-racism), populism (a populist nativism that problematizes elites), and left-wing politics (a left nativism that sees religious, racial, and populist nativists themselves as a threat to national culture). By moving systematically through these key iterations of nativism, the authors show how liberal ideas themselves are becoming tools for claiming that some people do not belong to the nation. A unique analysis of the most fundamental political transformation of our days, this book illuminates the resurgence of the figure of the "native," who claims the country at the expense of those perceived as foreign.