Accueil / Résidents / The cognitive and perceptual correlates of ideological attitudes: a data-driven approach

The cognitive and perceptual correlates of ideological attitudes: a data-driven approach 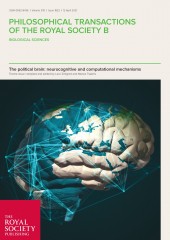 Although human existence is enveloped by ideologies, remarkably little is understood about the relationships between ideological attitudes and psychological traits. Even less is known about how cognitive dispositions—individual differences in how information is perceived and processed— sculpt individuals' ideological worldviews, proclivities for extremist beliefs and resistance (or receptivity) to evidence. Using an unprecedented number of cognitive tasks (n = 37) and personality surveys (n = 22), along with data-driven analyses including drift-diffusion and Bayesian modelling, we uncovered the specific psychological signatures of political, nationalistic, religious and dogmatic beliefs.