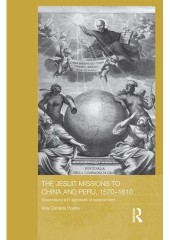 The rulers of the overseas empires summoned the Society of Jesus to evangelize their new subjects in the ‘New World’ which Spain and Portugal shared; this book is about how two different missions, in China and Peru, evolved in the early modern world. From a European perspective, this book is about the way Christianity expanded in the early modern period, craving universalism.

In China, Matteo Ricci was so impressed by the influence that the scholar-officials were able to exert on the Ming Emperor himself that he likened them to the philosopher-kings of Plato’s Republic. The Jesuits in China were in the hands of the scholar-officials, with the Emperor at the apex, who had the power to decide whether they could stay or not. Meanwhile, in Peru, the Society of Jesus was required to impose Tridentine Catholicism by Philip II, independently of Rome, a task that entailed compliance with the colonial authorities’ demands.

This book explores how leading Jesuits, Matteo Ricci (1552-1610) in China and José de Acosta (1540-1600) in Peru, envisioned mission projects and reflected them on the catechisms they both composed, with a remarkable power of endurance. It offers a reflection on how the Jesuits conceived and assessed these mission spaces, in which their keen political acumen and a certain taste for power unfolded, playing key roles in envisioning new doctrinal directions and reflecting them in their doctrinal texts.