Accueil / Evénements / From the Legion of Honour to the Star of India. New Nineteenth-Century Emperors and their Orders of Chivalry

From the Legion of Honour to the Star of India. New Nineteenth-Century Emperors and their Orders of Chivalry 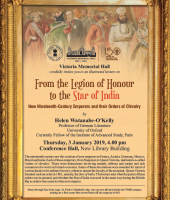 The nineteenth century saw the creation of new emperors in France, Austria, Germany, Mexico, Brazil and India. Each of these emperors, from Napoleon to Queen Victoria, instituted so-called 'orders of chivalry'. These were distinctions involving medals, ribbons and sashes and rich costumes to be worn on formal occasions. Some of these decorations were awarded for merit of various kinds or for military bravery, others to ensure the loyalty of the recipient. Queen Victoria founded such an order in 1861, namely, the Star of India. The lecture asks what the point of these orders was in general, and whether the Star of India was used in the same way during the British Raj as orders were used in other new empires.