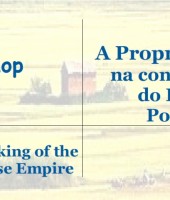 Intervention d'Allan Greer lors de l'Atelier "Property in the making of the Portuguese Empire"
Land, Property and Colonization: Some Conceptual Issues
The history of colonial property formation in the early modern Atlantic world has been written in rather naïve terms, as though property in land were a simple concept and as though the dispossession of indigenous peoples and the establishment of settler tenures in America were a step along the road to modernity. This paper re-examines the problematic meanings of basic terms, such as “land,” “property” and “owner,” in an effort to come to grips with the colonialist ideologies that seem to be built into the language of historiography. It opens up the question of whether it is possible to tell the story of colonial property making without resorting to teleology and without privileging European property systems at the expense of native property systems.