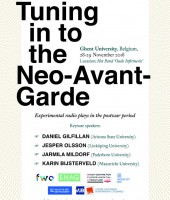 This paper examines the Canadian pianist Glenn Gould's radio documentaries of the
1960s and 1970s, focusing especially on The Idea of North (1967). Setting aside the distinction between documentary and drama, Gould approached radio (and studio recording, more generally) in terms of its characteristics of "analytic clarity, immediacy, and indeed almost tactile proximity" (from "The Prospects of Recording" (1966)). His particular innovation was to introduce techniques of "contrapuntal radio", forms of polyvocality that explored the disjunction between voice and meaning while still committed to the expression of thoughts and ideas in language. The paper will unfold Gould's aesthetic and technical choices, placing them in several contexts: his own writing and interviews, the larger institutional contexts of Canadian radio of the time, conceptualizations of radio as both instrument and environment (in John Cage's work as well as others), and finally the longer 20th-century theatrical tradition associated with Gertrude Stein's landscape theater and its treatment of the multiple temporalities of the stage. I will suggest that, for Gould and other artists and producers of the long post-war moment, the radio studio becomes a space that can navigate aesthetic and political contradictions accompanying experiences of mass audience, that is, the difficulties of representing groups to themselves.
Plus d'informations (site de l'Université de Gand)
28 Nov 2018 11:40
Adam Frank
Non
19201
Conférences, interventions et entretiens
Gand
Époque contemporaine (1789-...)
Monde ou sans région
Littératures