Appetitive and aversive motivation in depression: The temporal dynamics of task-elicited asymmetries in alpha oscillations 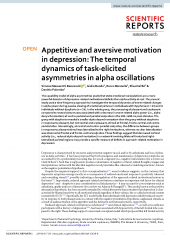 Depression is characterized by excessive and persistent negative mood, and/or by anhedonia and loss of pleasure in daily activities. It has been proposed that both emergence and maintenance of depressive symptoms are accounted for by a preferential processing bias for mood-congruent (i.e., negative) information (for a review see Clark & Beck. Such bias is supposed to produce a dominance of negative or threat-related thoughts, images and interpretations, in line with the idea that negative mood potentiates like-valenced or matching emotions, known as the negative potentiation hypothesis.

Despite the empirical support to this conceptualization, recent evidence suggests, on the contrary, that depressive symptoms emerge mostly as a consequence of reduced emotional response to positively valenced and rewarding stimuli, possibly indicating a dysregulation of the approach-related motivational system in the brain.