Accueil / Publications / Spiritual Empires in Europe and India. Cosmopolitan Religious Movements from 1875 to the Interwar Era 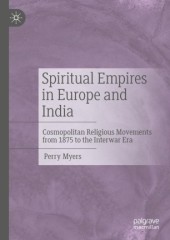