Accueil / Vidéos / The Brains that pull the Triggers. Paris Conference on Syndrome E

The Brains that pull the Triggers. Paris Conference on Syndrome E 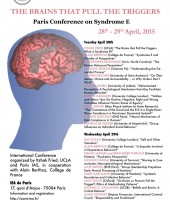 The transformation of groups of previously nonviolent individuals into repetitive killers of defenseless members of society has been a recurring phenomenon throughout history. This special conference brought together scientists and scholars from the human, social and brain sciences along with guests from literature, politics, and law to bear upon this tragic invariant of the human condition.

Marie-Christine Lemardeley (Deputy Mayor of Paris in charge of Research)

Itzhak Fried (Paris IAS/UCLA): “The Brains that Pull the Triggers. What is Syndrome E?”

Stephen Reicher (University of Standrews): "On Obedience, Choice and Accountability or Why Orders Don't Work"

Wolf Singer (Mac Planck Institute for Brain Research): "The Coexistence of the Good and the Evil in a Single Brain: Phase Transitions in a Non-Linear Dynamical System?"

Jacques Dubucs (Representative for the Ministry of Education and Research, Scientific Director for the Humanities and Social Science, Department of Research and Innovation)

Julie Grèzes (ENS Paris): "To be or not to be Charlie? The impact of group affiliation on the processing of others' emitted social signals"

Christophe Girard (Mayor of the 4e arrondissement of Paris)