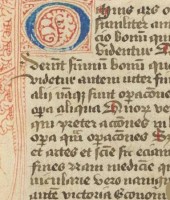 How to Write a History of Early Medieval Latin Philosophy?
by John Marenbon (Cambridge University).

Attenders of this virtual seminar will already know, from Nadja Germann’s talk, of the book we are writing together about language and logic in early medieval philosophy. She provided a foretaste of her part, on the Arabic tradition. I shall be talking about mine, on the Latin tradition, but rather more broadly, since I also have looming before me another, vaster early medieval project: to write, in English, the 600-1100 Latin Philosophy volume for the new Ueberweg Grundriss.
In the first part of my talk, then, I want to think about some of the general questions raised by my title (and incidentally to explain why I shall not quite be able to follow my own prescriptions in either of these books!). What are the chronological limits of early Medieval Latin philosophy, and what is involved in carving up the history of philosophy into such periods? What material should count as philosophy, and what is the place of logic and language within it?
Some of the material about which I shall be writing will, like that discussed by Nadja, be rather unfamiliar to historians of philosophy. But, in the second part of my talk, I shall focus on three well-known writers, Augustine, Boethius and Anselm, looking at their treatments of language and how they relate to their views on attaining knowledge.

No registration needed. You can watch live and participate in the Q & A following this Zoom link: https://iea-paris.zoom.us/j/91117963985