A new history of Platonism in late Antiquity: tradition, innovation and philosophical and religious marginality 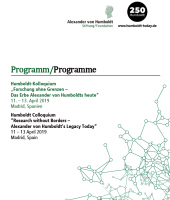 "The Alexander von Humboldt Foundation sponsors academic cooperation among researchers in Germany and the countries of the world. Every year, it grants more than 700 research fellowships and research awards to individuals who then become members of an international community of top researchers, the Humboldt Network. Currently, well in excess of 2,000 Humboldt alumni live and work in Spain, Portugal, France, Belgium, the Netherlands and Luxemburg, many of them in leading positions at universities, research institutes and other institutions in the entire country.
This year, on 14 September, our name giver, Alexander von Humboldt, would have celebrated his 250th birthday. Like virtually no other scientist and scholar, he shaped and wrought changes in the scientific world which still serve as a model for us to this day. He was a researcher who was far ahead of his time in many respects – an international networker, a pioneer of climate research, a science communicator. Alexander von Humboldt’s thinking reached well beyond the boundaries of subjects and countries, and, as a networker, he shared his knowledge with others. He was also a marketing genius who knew exactly how he needed to present his research to a public audience. And he was a political maverick, taking a clear stance on slavery, colonialism and exploitation, favouring women in science and adopting a worldview that was open to the viewpoints of other countries and peoples. He was convinced that it is when people tackle problems together and contribute their differing viewpoints that progress is made.
How modern, how relevant is Alexander von Humboldt today, 250 years after his birth? These are questions we are addressing this year, not just in our campaign “Humboldt today” at www.humboldt-today.de where we collate ideas, perspectives and personal stories from our worldwide network but also, quite concretely, at this Colloquium. In the course of this conference we are getting together to recall the diverse ideals of our eponym and share ideas on bringing a little more “Humboldt” into the academic conversation and our everyday lives."

"The aim of the interdisciplinary workshops is to spotlight current research by Humboldt alumni and Early Career Researchers in five loosely defined interdisciplinary areas. The workshops also provide a platform for discussing trends in current research, research collaboration between Spain, Portugal, France, Belgium, the Netherlands, Luxembourg and Germany as well as research funding. All participants – Humboldt alumni, Early Career Researchers and guests – are invited to attend these workshops."