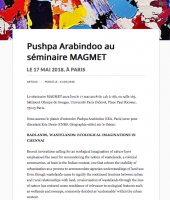 Recent invocations calling for an ecological imagination of nature have emphasised the need for reconsidering the notion of wastelands, a colonial construction, at least in the Indian context, one that echoes the inability of urbanisation as a process to accommodate agrarian understandings of land use. Even though wastelands came to signify the continued tensions between urban and rural relationships with land, revalorisation of wastelands through the lens of nature has restored some semblance of relevance to ecological features such as wetlands and swamps, commonly derided as ‘undesirable’ within the urban context.
Drawing on three recent examples of ecological restoration projects in the Indian city of Chennai (Adyar Poonga, Otteri Poonga and Pallikaranai Marshes), this paper argues that while these initiatives might have drawn attention to the much needed environmental challenges that such cities face as they tried to recover the more than functional necessity of wetlands as more than a category of nature, they have unwittingly exasperated the nature/waste binary as the idea of waste is further marginalised in relation to land. Calling for a more than sublime imaginary of landscape, there is a possibility of rethinking nature and waste outside the production of the urban.