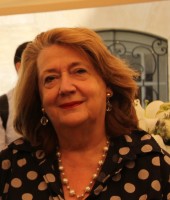 The Board of Directors of the Paris Institute for Advanced Study met on June 29, 2022, and elected Bettina Laville as President. She succeeds Dominique Schnapper, who has completed her two terms.

Honorary State Counselor, Doctor of Letters, Sciences Po laureate, and ENA alumna, Bettina Laville will quite naturally continue the intellectual, cultural, and scientific work carried out by the Paris IAS.

Her involvement reinforces the dynamic that the Institute has developed over the past few years: a forward-looking scientific life, concerned with major societal issues such as the environmental transition, and a commitment to research that will help design and bring about a more sustainable and resilient world.

Committed to the environmental cause, honorary president of Comité 21, of which she is the founder, and editorial director of the transdisciplinary journal Vraiment Durable, Bettina Laville is also a member of the scientific committee of the Institut Mines-Telecom, the Board of Directors of the Institut Agro, and a member of the Conseil national du développement et de la solidarité internationale (CNDSI).

She was director of the cabinet of the Minister of Environment Brice Lalonde, then adviser on environmental issues to the two Prime Ministers Pierre Bérégovoy and Lionel Jospin. She was also technical advisor to the President of the Republic François Mitterrand for environmental issues. In this capacity, she was responsible for the preparation of the Rio92 and Kyoto conferences. She participated in various capacities in all the Climate and Biodiversity conferences. She represented France on the international board of the International Union for Conservation of Nature (IUCN) from 1996 to 2001. She created the Environmental Film Festival in 1982 and co-founded the New Explorations Festival in 2016. She was an associate lawyer in charge of sustainable development in an international law firm for five years, and vice-president of the CSR Platform.

She taught at Science Po for 10 years and is now in charge of a master's degree dedicated to international environmental issues. Bettina Laville is the author of many articles and books, including L'adaptation au changement climatique, une question de société, published with the CNRS, as well as legal articles on the Paris Agreement.

We welcome her warmly to the Paris IAS!