Home / Events / Children on the Margins: Politics of Risk and Innocence

Children on the Margins: Politics of Risk and Innocence 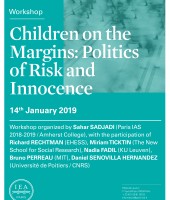 This seminar brings together social scientists engaged in research about children whose social marginality subjects them to protective interventions by the state, humanitarian agencies and medical professionals. What regulatory practices, subjectivities and ways of life emerge at the crossroads of the responsibility to care for children, the desire to alleviate their suffering, and the will to govern their (and society’s) future? What is the interplay between vulnerability, harm and risk, and between the child-in-danger and the child-as-(future) danger? How does the figure of the child (at times far from actual children) mobilize public sentiments and shape political landscapes in different geographical and social contexts?

Participants in this transnational conversation will address the themes of temporality, risk, innocence, disability, humanitarianism, migration, and gender/sexual politics.

Sahar Sadjadi, medical anthropologist and an assistant professor of Sexuality, Women’s and Gender Studies at Amherst College ; 2018-2019 Paris IAS fellow
She studied medicine at Tehran University, worked as a physician in Kurdistan, Iran and received her PhD in medical anthropology from Columbia University. She was a Mellon Postdoctoral Fellow at the Committee for Interdisciplinary Science Studies, The Graduate Center, City University of New York. Her research has been funded by Wenner-Gren Foundation, National Science Foundation and Brocher Foundation. She is currently a fellow at Paris Institute for Advanced Study and is completing a book manuscript about the clinical practices that have emerged around gender non-conforming and transgender children in the United States.

Richard Rechtman, psychiatrist, anthropologist, Director of Studies at the Ecole des Hautes Etudes en Sciences Sociales in Paris and member of the Centre d'Etudes Politiques Raymond Aron (CESPRA)
From 1997 to 2010 he directed the Centre Hospitalier Spécialisé de la Verrière (MGEN) and took on the role of Manager of the Department for Adolescent Psychiatry, which he created in 1999. He has conducted field research on the political and psychological consequences of the Cambodian genocide, and the invention of new psychiatric categories such as posttraumatic stress disorder, psychological suffering and adolescent psychopathology. His current research is focused on the anthropology of mass murderers and the anthropology of subjectivity.

Miriam Ticktin, Associate Professor of Anthropology at the New School for Social Research
She was Chair of Anthropology from 2016-2018, Co-Director of the Zolberg Institute on Migration and Mobility between 2013-2016 and Director of Gender Studies from 2012-2013. Ticktin’s research has focused in the broadest sense on “the political”: what it is, how it is called into being, how inequalities are produced and challenged and how new political formations are imagined.  She is the author of Casualties of Care: Immigration and the Politics of Humanitarianism in France (University of California Press, 2011) and In the Name of Humanity: the Government of Threat and Care (co-editor with Ilana Feldman, Duke University Press, 2010). Ticktin is currently at work on two related book projects: 1) a short book on innocence as a political concept, and how it produces an unending search for purity; 2) a book on the way border wall technologies travel, both transnationally and cross-species, and how these overlap with histories of quarantine.

Nadia Fadil, Associate Professor at the Interculturalism, Migration and Minorities Research Center at KU Leuven
She works on religion/secularism, subjectivity, race and postcoloniality with a particular focus on Islam in Western-Europe. Her most recent publications include Secular Bodies, Affects and Emotions. European Configurations (2018, Bloomsbury, with Monique Scheer and Birgitte Schepelern Johansen) and Radicalization in Belgium and the Netherlands. Critical Perspectives on Violence and Security (2019, IB Tauris, with Martijn de Koning and Francesco Ragazzi).

Daniel Senovilla Hernández, Universite de Poitiers, CNRS
Graduate in Law and holding a PhD in Migration studies at the University of Comillas, Madrid, as well as an EA and a Master in International migrations, Daniel Senovilla Hernández applies a multidisciplinary approach combining legal analysis and social research at a comparative level. Since 2004 he is based in France hosted by the research centre MIGRINTER (CNRS). He has also worked for the International Juvenile Justice Observatory, Brussels; Spanish Red Cross, Madrid & Médecins sans Frontières, Paris. He is currently in charge of the Observatory on the Migration of Minors (OMM: www.omm.hypotheses.org) and the main editor of the electronic journal “Children and young people on the move – Jeunes et Mineurs en Mobilité”