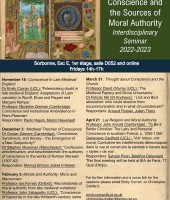 Seminar by Emily Corran, UCL, and 2022-2023 Paris IAS Fellow, as part of her seminar series "Conscience and the Sources of Moral Authority".

In this first meeting of the seminar series ‘Conscience and the Sources of Moral Authority’, Emily Corran and Nicolette Zeeman will discuss the theme of conscience as it appears in late medieval English vernacular writings. The late fourteenth and fifteenth centuries were a time in which the claims of personal conscience were the source of controversy. Wycliffe and his followers made far-reaching claims for the right to make private decisions based on personal conscience. An increasingly resistant church reaffirmed the importance of ecclesiastical authority, and church approved methods for making moral judgements. Yet, many authors complained that the church had lost moral direction. Corran and Zeeman will speak on two vernacular texts which illustrate aspects of this uncertainty around moral conscience, namely Dives and Pauper and Piers Plowman.

More information about this seminar and about the series: emily.corran@ucl.ac.uk