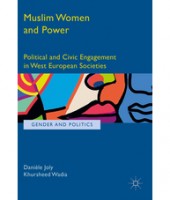 “The W.J.M. Mackenzie Book Prize panel has reviewed 12 nominated books. In order to judge the books we have followed the following criteria – a book that makes a major contribution to political studies by advancing disciplinary and interdisciplinary debate through the use of the rigorous methods and analysis leading to original insights. The book should be of the highest quality, internationally recognised and contribute to wider social and political debates of significance for citizens. While many of the books were excellent, arguably representing the healthy state of the discipline, the panel judged that the book that most exemplified these qualities was Joly and Wadia’s Muslim Women and Power: Political and Civic Engagement in European Societies.

The book addressed the question of how Muslim women participate in politics in France and the United Kingdom, drawing on multiple sources of original data from media reports to in-depth interview and structured surveys. The authors bring these data to bear on understanding how Muslim women negotiate ethnic, religious, social and political institutions to create unique forms of engagement. They offer a unique insight into a highly important and topical political problem. The authors make an important intervention to debates within political science, advancing the discipline. Moreover, this book has 'real world' policy relevance to decision makers, citizens and communities alike.”