Home / Events / Europe in US - China Relations: Past and Present

Europe in US - China Relations: Past and Present 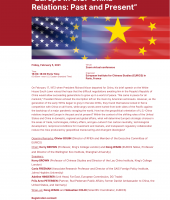 Seminar organized by the European Institute for Chinese Studies, with the participation of Olivier Bouin, director of the RFIEA and Don Wang, Shanghai University, and Eurics Fellow

On February 17, 1972 when President Richard Nixon departed for China, his brief speech on the White House South Lawn voiced the hope that the difficult negotiations awaiting him in the People’s Republic of China would allow succeeding generations to grow up in a world of peace. “We came in peace for all mankind,” President Nixon echoed the inscription left on the moon by American astronauts. However, as the generation of the early 1970s began to grey in the late 2010s, they found themselves locked in fierce competition with China on all fronts, while angry words were hurled from both sides of the Pacific against the backdrop of a major pandemic ravaging the world.

How has the geopolitical orientation of U.S.–China relations impacted Europe in the past and at present? Within the context of the shifting roles of the United States and China in domestic, regional and global affairs, what will determine Europe’s strategic choices in the areas of trade, technologies, military affairs, and geo-culture? Can carbon neutrality, technological development, reciprocal conditions for investment and markets, and transparent regulatory collaboration reduce the risks produced by geopolitical maneuvering and divergent ideologies?

Opening Remarks:
Olivier BOUIN (Director of RFIEA and Member of the Executive Committe of Eurics)