Home / Events / God’s Warriors in the Most Christian Kingdom: a Reconsideration of the French Religious Wars

God’s Warriors in the Most Christian Kingdom: a Reconsideration of the French Religious Wars 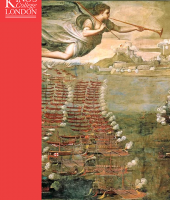 Lecture by Penny Roberts (2018-2019 Paris IAS fellow) as part as the conference "Religion and War. From Antiquity to Early Modernity"

The conference, hosted by the Departments of Classics and War Studies, and the Sir Michael Howard Centre for the History of War at King’s College London, will mark the launch of a new international research network Religion and War through the Ages dedicated to exploring the nexus between religion and war as a recurring cross-cultural phenomenon attested in a great variety of historical societies from antiquity to the present and presenting a particularly poignant modern challenge.

With wide geographic coverage encompassing the Mediterranean basin, Near East, North Africa, and Europe, and taking Classical Antiquity as a starting point, but looking as far back as the second millennium BCE and forward to the Westphalian settlement of 1648, this conference will be a comparative and cross-cultural exploration of the persistent question about the role of religion in motivating, guiding, and explaining the causes and conduct of war.

What role do religious ideas play in human conflicts? Citing direct divine command or posing as guardians of divine interests, actively seeking divine approval or drawing courage from imagined divine support, armies from ancient times to the present and across diverse regions and cultures, have gone to battle with one another.  The conference will investigate specific historical cases and contexts that illustrate the influence of religion on war, from motivation to rules of conduct.  Major themes include: the demands of different sets of religious beliefs that in the past provided a cause for war; the conditions under which religious considerations became a dominant force among the reasons for and against war; the role religion played in escalating war or putting limits on violence and how that influence was felt; finally, how religion, in turn, was affected by the conduct of war in past societies.

​The French Wars of Religion are often presented as the quintessential religious war and the Most Christian king of France presided over the most bloody and divisive civil war of the Reformation period. The ‘wars’ or ‘troubles’ as contemporaries referred to them, divided the French army, pitting former noble comrades against one another. Their motivation was, and is, often seen as cynically driven by self-interest and greed for power rather than any higher calling. Indeed, in many ways, the wars were no different in religious terms than those which preceded them, with victories and deaths in battle determining whose side God was on. However, it will be argued that there was a new degree of intensity to a struggle that was framed in spiritual terms, and that was contributing to a wider international struggle between Protestants and Catholics.