Hobbes against the Aristotelity of the Schools in the Leviathan 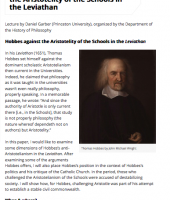 Lecture by Daniel Garber (2017-2018 Paris IAS fellow), organisée by the Department of the History of Philosophy (University of Groningen)

In his Leviathan (1651), Thomas Hobbes set himself against the dominant scholastic Aristotelianism then current in the Universities. Indeed, he claimed that philosophy as it was taught in the universities wasn’t even really philosophy, properly speaking. In a memorable passage, he wrote: “And since the authority of Aristotle is only current there [i.e., in the Schools], that study is not properly philosophy (the nature whereof dependeth not on authors) but Aristotelity.”

In this paper, I would like to examine some dimensions of Hobbes’s anti-Aristotelianism in the Leviathan. After examining some of the arguments Hobbes offers, I will also place Hobbes’s position in the context of Hobbes’s politics and his critique of the Catholic Church. In the period, those who challenged the Aristotelianism of the Schools were accused of destabilizing society. I will show how, for Hobbes, challenging Aristotle was part of his attempt to establish a stable civil commonwealth.