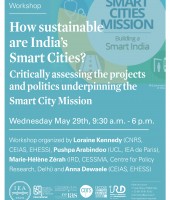 India’s Smart City Mission was inaugurated by Prime Minister Narendra Modi in 2015 with the aim to promote intelligent solutions to improve urban infrastructure and services. It draws inspiration from globally-circulating ideas about digital and technology-driven urban innovation. Initially announced as a program to build 100 new smart cities across the country, the Mission finally took the form of a competition between 100 existing Indian cities, selected by the central and regional governments. Each candidate city proposes an urban project either to improve (retrofit) or redevelop certain areas, or to extend the city within the administrative boundaries (greenfield development). To design their proposals and strategies, candidate cities are assisted by consultants appointed by the state or by an external partner agency, such as the World Bank or the Asian Development Bank, or even "sponsor" countries including France via its Agence française de développement. The projects are then put into competition, and the winners can implement their proposals while the others are invited to review their strategic plan and resubmit it in the next round.

Early assessments of the Smart City Mission, including the various proposals made by the candidate cities, the first projects carried out and their reception by local authorities and residents have raised a number of questions about this new mode of city-building. First, the Smart City Mission must be understood in the context of the gradual adoption of the smart city concept in India, and it therefore engages with scholarship on the global circulation of models and their adaptation to specific contexts. Secondly, the Mission offers a compelling window through which to examine the transformation of modalities of state action in the urban domain, in terms of decentralization and changing scales of governance, but also with regard to partnerships between the public and private sectors. Third, since the Mission highlights popular participation in project design, it invites us to question the choice of audiences targeted by this type of programme as well as the relevance of the proposals in relation to local needs and realities. Fourth, the study of smart city projects highlights the gap between the ambitions of the central government and the technical skills of municipal authorities, thus raising the question of the differences between the scheme’s objectives and its implementation.

Following on a first meeting devoted to India’s Smart City Mission held in September 2018, the specific aim of this international workshop is to focus on issues of social and environmental sustainability. On the basis of field-based investigations, the presenters will critically assess the smart city experiments as they unfold. Among the questions to be discussed are the following: How does India’s engagement with smart cities compare with other international cases? To what extent do projects in India draw on cutting-edge technologies? How can we characterize the governance and politics of India’s engagement with ‘smart urbanism’?

Cities and the (re)ordering of elite coalitions under advanced neoliberalism
Ipshita Basu, University of Westminster, London

Of photovoltaics and puffed rice: the politics of energy and climate change in India’s Smart Cities
Ankit Bhardwaj, Centre for Policy Research, Delhi

Exceptional governance structures at the heart of the SCM: an evaluation of Special Purpose Vehicles
Marie-Hélène Zérah, CESSMA and Centre for Policy Research, Delhi