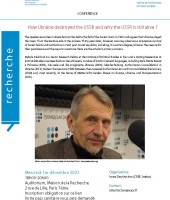 Lecture by Mykola Riabchuk, 2021-2022 Paris IAS Fellow, organized by the Centre de Recherches Europes-Eurasie-CREE, Inalco, on the occasion of the 30th anniversary of the Ukrainian independence referendum on December 1, 1991.

Mykola Riabchuk examines multiple factors that led to the fall of the Soviet Union in 1991 and argues that Ukraine played the major if not the decisive role in the process. Thirty years later, however, one may observe an impressive survival of Soviet habits and institutions in most post-Soviet republics, including, to a certain degree, Ukraine. The reasons for their persistence and the ways to overcome them are the scholar's primary concern.