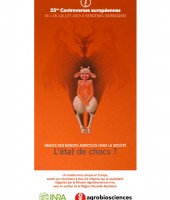 Presentation by Saadi Lahlou, Director of the IEA of Paris, as part of the 25th edition of the " Controverses européennes " (European Controversies)

In 2003, the Agrobiosciences Mission organised the 9th controversies on the theme: "Images and imaginations at the heart of exchanges between agriculture and society". The aim was to explore the diversity of perceptions of agriculture and farmers by the rest of society, based on an exclusive survey conducted by BVA, summarized in three key words: nostalgia for the agriculture of yesteryear, idealized and affective; the gap between reality and imagination, with a misunderstanding of the changes in the farming profession; the respondents' sense of powerlessness in the face of the future of French agriculture within systems that go beyond it, such as Europe.

More than fifteen years later, what has changed? Many things and so little at once. So little if we listen to what farmers are feeling today, always convinced that they are largely misunderstood or even stigmatized. Everything, if we observe the evolution of practices and awareness, the fragmentation of models, new eating habits, alternative circuits, but also climate change, the break-in of digital technology, the rise of radical disputes over pesticides, the industrialization of agriculture or livestock...

What are our visions today of the different types of agriculture in France and Europe? What images are projected on farmers and how do they perceive themselves? Who produces and relays these images, for what effects? At a time when agricultural models are fragmenting and the social contract looks like a broken mirror, what are the ways to overcome image and communication battles?

On all these concrete subjects, these 25th Bergerac European Controversies invite all those who wish to do so - farmers, researchers, trainers, citizens, associations, politicians... - to reflect and exchange ideas together during three days, without taboos or wooden tongue.