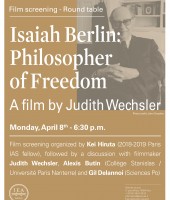 “Isaiah Berlin, philosopher of freedom”, a 72 minute documentary completed in 2018, traces Berlin’s intellectual development in the context of his life and times, through archival film and recordings of its subject, and interviews with his biographer Michael Ignatieff, his principal editor Henry Hardy, and pianist and writer Alfred Brendel, among others. From Berlin’s early life in Riga, to his family’s move to London in 1921 when he was 11, through his own recounting, we trace his personal and intellectual development. During the War, Berlin worked for the British Diplomatic Service in Washington and in 1945 in Moscow. There he encountered Anna Akhmatova who changed the course of his life. He departed from more technical philosophy, embracing the history of ideas. The film traces his major contributions to the philosophy of freedom, his studies of Russian thinkers, especially Herzen, Tolstoy in his “Hedgehog and the Fox”, his early study of Marx, his essays on Liberty and Romanticism.

The film is written, directed, produced and filmed by Judith Wechsler.

“A brilliant, deeply revealing account of one of the truly great minds of the twentieth century’ - Orlando Patterson, Professor of Sociology, Harvard

Judith Wechsler is an art historian and filmmaker.   She has written and directed 29 films, predominantly on art. Wechsler is NEH Professor emerita in art history at Tufts University, taught for many years at MIT and was visiting professor at Harvard, L’Ecole normale supèrieure in Paris and The Hebrew University, Jerusalem. Her books include The Interpretation of Cézanne and A Human Comedy: Physiognomy and Caricature in 19th century Paris; Cabinet des dessins, Honoré Daumier, and numerous articles and essays on 19th and 20th century art. She has made films for the Louvre “Dessiner, la main qui pense”, “Rachel de la Comédie francaise, a film on Monet’s Waterlillies for the reopening of the Orangerie museum, and for the Metropolitan and other museums. Her last five films are on the history of ideas, focusing on Jewish intellectuals in exile, including Walter Benjamin and Aby Warburg. Wechsler was a fellow at the American Academy in Berlin and a visiting fellow at the Van Leer Institute in Jerusalem. She was awarded Chevalier de l’ordre des arts et des lettres.