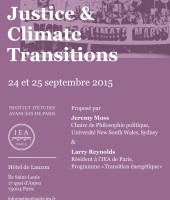 In the lead up to the 2015 UN Paris Climate Conference the Paris Institute for Advanced Studies will hold an interdisciplinary conference on “Justice and Climate Transitions” organised with the University of New South Wales, Sydney, Australia. The Conference will bring together leading thinkers from philosophy, policy and the social sciences to examine the moral, social and political issues at stake in transition to a low carbon society. Panellists are invited to discuss how might we interpret and evaluate different transition pathways and low-carbon futures in terms of social justice. The aim is to present both philosophical and critical social scientific perspectives on these questions before bringing these into dialogue with each other. The conference panels will be organised into two themes outlined below.

The conference will include an event hosted by the city of Paris at the Auditorium de l'Hôtel de Ville (Thursday, September 24th afternoon).

Theme One: Climate transitions and moral and political philosophy.

These presentations will explore the specifically moral issues associated with a transition to a low carbon society. This dimension of our response to climate change is important if we are to avoid creating further injustices. Ethics and in particular considerations of justice, plays a crucial role in determining what the responses to climate change should be and in how we should evaluate such responses. This part of the workshop will focus on the crucial dimension that moral and political philosophy brings to understanding how we ought to respond to dangerous climate change and how it can contribute to the work of other disciplines to bring about a transformation. The workshop will bring together leading international philosophers to consider issues such as:

Critical questions of social, global and environmental justice are posed by how the transition to a low-carbon society and energy system is pursued. Markets, technologies, governments, civil society and consumers (or combinations of these) have all been enthroned as agents of low-carbon transition. Yet, these attributions of agency all have implications for the speed, direction and outcomes of possible energy transitions, including the emerging distributions of ownership and power. These sessions will therefore focus on a critical analysis of public policy of energy transitions and climate justice.

(In French and English with simultaneous translation)

15:00 - 15:10      Dominique Schnapper, President of the Paris Institute for advanced Studies : Presentation of the stakes of the conference