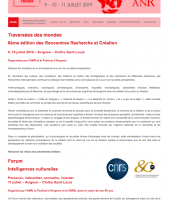 On 9 and 10 July 2019, meetings on the theme "Traversées des mondes", organised by the ANR and the Festival d'Avignon

Moving the frontiers of knowledge and opening up new perspectives!

By bringing together authors, actors, directors, choreographers and researchers from different disciplines, these International Meetings help to shift the boundaries of knowledge and open up new perspectives.

After "Corps en scène", "Mise en intrigues", "Violence et passion", "Le désordre du monde !" and "Le jeu et la règle !", this new edition will allow us to compare the thinking of the works with the most recent scientific work.

A field of excellence for research in the human and social sciences in its disciplinary diversity, the field of creation and culture is also emerging for cognitive sciences and neurosciences through the analysis of perceptual, emotional, motor processes and fundamental learning. The origin of language and languages, the functioning of the mind and the complexity of human communication, the texts and narratives of past civilizations or of today's society are all fundamental questions for research that are explored during the Rencontres. These questions are also at the heart of projects funded by the National Research Agency and Investissements d’Avenir.

In a context of globalization, which is accompanied by new forms of exchange between cultures, this event is part of a perspective of a better knowledge of creation both in terms of its social and economic function and its role in human development and the cohesion of societies.

On July 11, forum "Intelligences culturelles - Percevoir, interpréter, connaitre, inventer", organized by the ANR, the Festival d'Avignon and the CNRS, as part of its 80th anniversary

This Forum will bring together researchers, artists, cultural representatives, key witnesses and the public to discuss the role of culture and creation in fundamental learning and in the development of societies.

Through analysis, observation, experimentation and scientific approach, we are constantly pushing back the frontiers of knowledge and the arts, fiction and performing arts are constantly feeding our experience of the world. Scientific research and creation share the common goal of inventing new spaces of knowledge and new perspectives on the world.

In creation, research and innovation, our societies are reinventing themselves!