Home / Events / War as Contact Zone in the Nineteenth Century 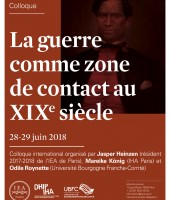 Military history has come a long way in the last fifty years. Popular media such as the History Channel and the biographies of great generals on the shelves of many bookstores might suggest at first glance that the field is still dominated by ‘drum and trumpet historians’ that speak to audiences well on the right of the political spectrum. However, the ascendancy of ‘new military history’/’nouvelle histoire-bataille’ and the ‘cultural history of war’ has in fact advanced our understanding of human conflict enormously. We know more than ever before about the multilayered webs of entanglement that connect army and society, as well as the way in which soldiers and civilians experience violence. Work in this vein has shown that instead of being an exceptional state and thus marginal to society’s ‘true’ concerns, war has been implicated in some of history’s most far-reaching changes, such as the evolution of the modern idea of citizenship.

While military conflicts are undeniably destructive in terms of their human and material cost, they also have unintended creative consequences. The German historian Ute Frevert has aptly termed wars ‘inter- and transnational events par excellence’ because no other phenomenon - with the possible exception of migration - brings so many people in such close contact with each other. Napoleon may have failed to establish a lasting European empire, but the veterans of the Grande Armée could boast familiarity with all parts of Europe after having marched across the Continent for almost a quarter of a century. Of course, when such large bodies of men fuse together or interact with civilian populations, the nature of these encounters differs widely. Some manifestations are benign, including the bonds of comradeship that can blossom into ‘fictive kinship’ (Jay Winter) among soldiers, whereas atrocities and genocidal mass exterminations represent the opposite form of encounter. Both extremes of the spectrum have been the subject of extensive scholarship in recent decades, thanks to a process of analytical cross-fertilisation through interdisciplinary borrowing. Just as it is no longer good practice to write about morale and combat effectiveness without attention to sociological or anthropological theories that explain unit cohesion, investigations into the causes of war crimes have underscored the benefits that accrue from close analytical attention to the psychological triggers of violence and the spaces in which these acts take place. Finally, the fruits of transnational history and global history remind us that any attempt to explain war-as-encounter must have a firm grounding in cultural studies, especially with a view to uncovering how patterns of communication evolve and the transfer of knowledge occurs.

Building on these insights, the workshop seeks to encourage further debate on the mechanics of encounter and transfer processes in war during the ‘long nineteenth century’ (1789-1914). In a second step we wish to explore how historians working on this subject can use new digital methods and impact case studies to make their findings accessible to the public. The choice of period is informed by this era’s manifold innovations in such fields as communication, mass transport, weaponry, international law and the conduct of war, which have generated fruitful dialogue on the question whether the nineteenth century set the path for a totalitarianisation of warfare or should instead be evaluated on their own terms.

When soldiers met the locals: the Balkan Wars as a contact zone among combatants and non-combatants
Panagiotis Delis (Athens/Burnaby)

Defeat as opportunity. The debate on the need for a militarised society in Italy from the Risorgimento to the First World War
Marco Mondini (Trient)

The armée comes to town. Social problems of military presence and barracks supplying in the Napoleonic Kingdom of Italy (1805-1814)
Vittoria Princi (Oxford)

⚠ On June 29th, the conference will be held at the Institut historique allemand, 8 rue du Parc Royal, 75003 Paris