Home / Events / Laboratory of the Future: Lenin’s Body between Biochemistry and Art

Laboratory of the Future: Lenin’s Body between Biochemistry and Art 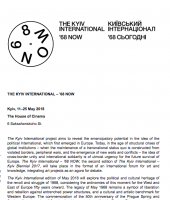 The Soviet communist project was organized around the figure of “Leninism” – the discursive and material construct that consisted of Lenin’s texts and quotes, images and sculptures, and Lenin’s physical body in the Mausoleum. As the power center of sovereignty, “Leninism” was constant and eternal; it was the only physical body and body of knowledge that could not be questioned or transcended within Soviet political discourse. In fact, to remain “the same” Leninism was continuously changed and reinvented throughout Soviet history: Leninist texts were misquoted and censored, Leninist images were invented and retouched, and Lenin’s physical body was re-sculpted and re-embalmed. Meanwhile, the biochemical science that maintained and transformed Lenin’s body remained at the center of this ongoing political reconstruction. What does “Leninism” look like from the perspective of science with its biological labs, chemical tests, and anatomical procedures? How do the political, the artistic, and the biological intersect in this unique project? What does this perspective tell us about the iconoclastic movements directed at Lenin’s images today?