Home / Events / Laboratory of the Future: Lenin's body between biochemistry and art

Laboratory of the Future: Lenin's body between biochemistry and art 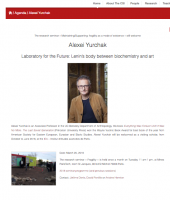 Talk by Alexei Yurchak (2017-2018 Paris IAS fellow), within the framework of the CSI research seminar at Mines ParisTech: "Maintaining/Supporting: fragility as a mode of existence"

The seminar starts with one observation: the current proliferation of research that deals with care, or attention. These studies investigate the climate or Gaia, the art of repairing objects or conserving artworks, the maintenance of technical networks, or the right ways to consider vulnerable or marginalised people. Our project will be successful if we manage to find fertile passages – tighter, better woven, singular, to dig in situation – between empirical research and the thematic speculative approaches emerging everywhere on this matter: reflections on what it takes, philosophically, critically, politically, to support fragile entities, and thus to participate in the curious reciprocal enrichment that such caring relations carry, as if they were granting each of their terms more existence.
Beyond the variety of these studies and the imperious nature of the commitment they demand, it appears to us that this growing body of research demonstrates a worry and concern that is new, both in terms of sensitivity and of objectives, vis-à-vis the fragility of the world, beings and things. Beings or states that are at the same time endangered and in the process of constituting: this could be the provisional definition of fragility or precariousness we adopt. We do not take fragility as a state that only defines some of us but as a shared way of grasping these open realities, often rough but rich in possibilities; fragility is not a flaw or a lack, according to a default definition, but what requires a form of attention that makes us sensitive to these calls.
By accompanying rather than observing these realities, researchers mobilize a wide range of resources from different traditions. Going beyond the requirement for participation, one has to question the very nature of research if one has to reconcile one’s care for the state of the world with the need for rigorous empirical investigations. This should include the modes of inquiry, the relationship with the actors, objects and environments, the status of texts and deeds produced, as well as questioning our interactions with other disciplines and with philosophers, writers, artists or activists.
Taking advantage of this momentum, in which we play a part, and in the wake of the resumption of pragmatism, philosophies of difference or pluralistic anthropologies, the seminar aims at a better understanding of these researches of a new kind. By discussing them and connecting them, sometimes paradoxically, around the topic of fragility, our aim is to unfold the forms of inquiry, writing and action that these studies all at once require and reinvent, while reformulating the concepts that may support this movement.