Home / Events / Mind and Body Across Time and Discipline

Mind and Body Across Time and Discipline 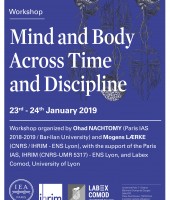 The two central ways of conceptualizing psyche–soma relations in the western tradition were, and still are, the Platonic and the Aristotelian paradigms. According to Plato, a human being is a combination of two distinct substances, a mortal body and an immortal soul. According to Aristotle, a human being is a unified substance: the soul (psuche) is the form of the body, and to describe the soul is to describe the characteristic powers of human beings, just as describing the soul of a pine tree is to describe the characteristic powers of pine trees. Human beings are seen on a continuous scale with all other beings, and to say they have a rational soul roughly means that they have a linguistic capacity that other beings lack.

With the rise of modern science, the Platonic paradigm was replaced by the Cartesian paradigm, whereas the Aristotelian paradigm gradually disappeared from the sciences. Descartes’ program was hugely successful, indeed so successful that most work today in cognitive science, philosophy, medicine, and neuro-economics, among a variety of other disciplines, remains predicated on this framework. Descartes’s approach was also successful in other respects: in seeing bodies as mechanisms, it enhanced a very fruitful research program in physics, medicine, and the life sciences in general. Mechanist and dualist conceptions also, by analogy, informed other branches of knowledge, including, for example, theology (in discussions regarding the immortality of the soul, and its separation from the body) and political philosophy (in theories about the constitution of the body politic and state anatomy).

But the success did not come without a cost. It promoted a split picture of human nature that has led to a still prevalent division in academic and medical institutions, where one branch of medicine deals with our psyche and another deals with our body, but none deals with the human person. It also promoted a picture of our nature at odds with our common and basic experience of direct and ongoing interplay between the physical and mental aspects of our own nature. Moreover, it has strongly encouraged physicalist models of our collective nature, of political society, or even of nature as a whole, at the detriment of other possible approaches.

This is why there is an urgent need to look into the history of philosophy and ideas in order to explore other possible conceptual resources. Such views certainly exist but it may take some serious work to appreciate and recover them. Indeed, it is high time to reassess the various uses of the historical idea of psyche–soma relations. We believe that a historical perspective will help understand where medicine, the sciences of mind and the life sciences stand at present with regard to the central role of the Cartesian framework.

By broadening the outlook to include also other sciences where the consideration of psycho-somatic relations plays a role by analogy, and thus by taking a broad trans-disciplinary outlook on the possible applications of such models in the context of different sciences, the conference offers an opportunity for a dialogue between historians of science and ideas, scientists, and philosophers.

14:45 - 15:30   “Cudworth on Plastick Natures: Why Not Only the Mental Defies Materialism”
Marleen Rozemond (Toronto)