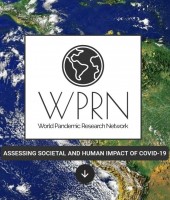 Initiated by the Paris Institute for Advanced Study and the RFIEA Foundation, WPRN is the first global, real-time directory of research & research resources on the societal and human impacts of the Covid-19 pandemic. Launched at the end of April 2020, it currently lists 600 initiatives and research projects from around the world.

With Saadi Lahlou, Director of the Paris Institute for Advanced Study, and Olivier Bouin, Director of the RFIEA Foundation, both leading coordinators of the World Pandemic Research Network.

What is WPRN in a few words?
WPRN is an interactive platform that lists research projects and resources adressing the societal and human impact of the COVID-19 pandemic. WPRN is transdisciplinary but is primarily addressed to the human and social sciences, which are on the front line in helping our societies to face the resulting wave of socio-economic crisis and to prepare "the world after".

How was WPRN born?
At the beginning of March 2020, a few days before the first national confinements, Xiaobo Zhang, Professor of Economics at the University of Beijing, a fellow of the EURICS, the European Research Institute on Chinese Studies incubated by the Paris Institute for Advanced Study , gave a conference on the challenges that Chinese companies faced since the beginning of the pandemic and would face in its aftermath, based on a survey of 2,500 companies just conducted the previous weeks.

The benefit for Europe of this sharing of experience was obvious to anticipate and manage the crisis. the next day we organized a meeting between Zhang and the Paris City Council so the City could draw lessons from Chinese management and transfer the main conclusions, and we transferred the main conclusions to various officials including the advisors to the French President.
It was clear to us how the pandemic brutally revealed the extent to which our destiny had become globalized and how essential a global response had become. How could we share experience and resources, how could we learn to anticipate by taking advantage of what is being done elsewhere on the planet? As the Chinese case demonstrated, we had to act swiftly to prepare for the economic tsunami that would follow the health crisis. Research and feedback would have to be shared, and institutional nationalism and other boundaries would have to be overcome in order to make full use of open science and collective intelligence. And that had to start start with knowing who does what, where; but there was no such instrument to do that.

The idea of WPRN was born. There was an urgent need to create a "real-time repository" of research projects and research resources on the crisis that would follow Covid-19 at the international level. There was a need for a tool simple to use, enabling collaborating quickly, without going through the scientific publications system that take 3 months to 2 years to become available.
In short, pushed by the urgency of the crisis, we built the tool that fills a gap in the current research ecosystem of social science and humanities, to enable quick reaction, collective intelligence and collaboration.

What is the added value of a tool like WPRN compared to existing search engines?
WPRN stands out from other initiatives because of the robustness of its cloud-based infrastructure and because it mobilizes an international and interdisciplinary network of "referents" who sort projects, providing a first-class scientific “edited” output. In addition, the partner institutions will soon be able to earmark projects they have evaluated and funded with the "blazon" of their cognitive authority. A search engine such as Google (unlike WPRN) has neither a structured indexing nor a system for sorting between the wheat and the chaff. As case most projects appear to have similar keywords (coronavirus etc.) search requests with standard search engines produce an avalanche which is a mixed bag. Databases of publications have good indexing and structure, and the documents are edited, but as we just said the publications come at least several months after the research, so ty are of little help to build collaborations with colleagues who are working right now on the topic. While WPRN, where every project has a “contact” button connecting to project leadres, makes getting in touch super easy.

Reactivity is crucial: the rapid setting up of international collaborations between laboratories of different cultures and nature requires knowing who is ready to collaborate, who now has the necessary competence.

WPRN enables all this: sharing data, questionnaires, hypotheses in real time - while maintaining the intellectual property (authorship) system of tracking and accountability. It creates the conditions for accelerating "good" research and the emergence of new collaborative research formats.

Does WPRN have an international reach?
Initiated by the Paris Institute for Advanced Study and the French Network of Institutes for Advanced Study (RFIEA+), WPRN has already received support from the International Academic Union, which federates some one hundred humanities and social science academies in more than 60 countries, the European and global networks of Institutes of Advanced Studies NETIAS and UBIAS, the European Alliance for Social Sciences and Humanities (EASSH), the International Panel for Social Progress (IPSP) and the International Science Council. In France, WPRN has received support from the Ministry of Higher Education, Research and Innovation, the Athena Alliance, the CNRS and the French network of Maisons des Sciences de l'Homme. Other contacts are ongoing at the international and French level.

It is interesting to note that a European initiative is in the international race; we are ahead of the game here as shown by the requests we receive to participate in European projects.

How many projects are already registered?
So far over 400 projects and initiatives are registered in the wprn.org database. This number is growing day by day. Not only does wprn.org give a vision to the research communities on what is happening and being done in the world; it is also a great tool for decision-makers, journalists, and many other civil society actors who need to have an up-to-date, international and prospective vision of the social and economic problems related to the crisis. Elected officials and large administrations for example can use WPRN to build innovative policies by drawing inspiration from what is being done elsewhere.

The challenge therefore seems to be for public authorities to encourage individuals (especially young people and those without co-morbidity, who have little to fear for themselves) to pay attention to others. In other words, asking citizens to respect instructions in order to spare the lives of others, and to spare the medical profession the trouble, is an altruistic argument that goes beyond the call for selfish safeguard.

Although this work, carried out on American, English and German populations, is still awaiting validation for publication, it opens up interesting prospects for further exploration of these promising avenues and inspires the design of public health campaigns. It should be noted in passing that several campaigns that have largely adopted this perspective find here a scientific justification. This lesson should also be retained for future crises: altruism still exists and can be a powerful driving force in crises, whatever the cynics may think.

There is much more to learn from WPRN, and we will be publishing notes regularly, for example one is in preparation on tracking devices. Above all we encourage everyone to go and explore the database with their own questions. The search interface by themes, disciplines, geographical areas but also full text is very user-friendly.

What future for WPRN?
The pandemic offers us, in a sense, the opportunity to reach out and show that in this global game, openness and cooperation pay off, and much faster than institutional nationalism. Indeed, this is a lesson that, in other areas, even industrialists operating in a highly competitive environment have understood - see the notions of horizontal innovation, open science, pre-competitive research. We are now expanding the WPRN platform to adapt it at the service of other pressing issues such as climate change, which are at the root of the next - alas, inevitable - crises. If we could anticipate a little more in this case the construction of global intersectoral cooperation and deploy collective intelligence before the crisis rather than during it, it would be a progress. Networking and the sharing of information and resources are the real nerves of war in overcoming the epidemic, but also in many other global issues. We are working towards this.
The motto of William of Orange, aka William the Silent was: "No need to hope to undertake, need not to succeed to persevere". We do undertake. So far, we are succeeding, but the task is immense. We call on all people of good will who have understood that this time we cannot wait to join us. Registering your project in WPRN takes 5 minutes, and it is already contributing to collective intelligence.