Religion and Confession as the Bedrock of Monarchy and Court 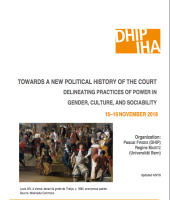 Talk by Helen Watanabe-O'Kelly (2018-2019 Paris IAS fellow) within the framework of the conference "Towards a New Political History of the Court, c. 1200‒1800. Delineating Practices of Power in Gender, Culture, and Sociability", organized by Pascal Firges (IHA) and Regine Maritz (Bern University)

The legitimacy of the monarch rested on his - more rarely her - role as God’s anointed representative on earth. This determined the ceremonial of the coronation and of the royal entry and was the reason for the king’s supposed ability to cure by touch. The relationship between monarch and subject was modelled on the relationship between God and His faithful. This was expressed on public occasions by ruler and people joining in worship, by the people praying for the safety of their ruler and thanking God for it in the Te Deum. The central emotions of love and fear which subjects were required to feel for their sovereign mirrored the emotions to be felt by the believer for the deity. Confessional difference disturbed this relationship after the Reformation, so that Protestant electors had a problem in participating in the coronation of a Holy Roman Emperor, the French king made war on his own subjects and the king of England was sentenced to death by his own people.
On the level of the court, religious worship structured its daily life and regulated the behaviour of the consort in particular. She was the one who was expected to convert when a dynastic alliance joined members of divergent confessions, for one of her principal duties was to practice her religion publicly and visibly as a ‘pillar of prayer’ (Betsäule). She was expected to accept as God’s will the travails of her own fertility or lack of it.